I have been working through some sketches lately to arrive at 5 or 6 pictures that I can work up into large canvases. The first 2 have been on my easel for the last couple of days. I have taken some photos to show a bit of the process of how I work them up. 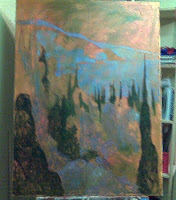 Here is the under painted 30 x 40 canvas. I prefer to work with wet on wet. The colours are applied on a wet warm coloured ground. As a fall scene, little chips of this ground that show through should add to the overall warmth. Here I am building the mid tones and the shadows. There will be a lot of green in the darkened foreground – in the underpainting I am working in purples to make the green more luminous when they are overpainted. 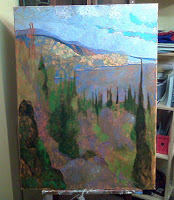 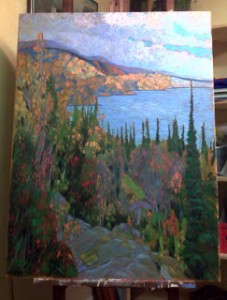 And getting close to the final picture – a few more touches and it will be completed. 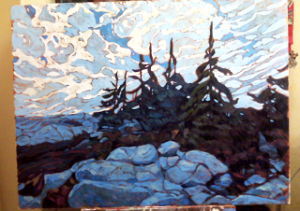 One of the most interesting places I have canoed is Killarney Park – the white stone there is really striking – it takes on the colour of the surrounding light. That’s the thinking behind this image – the sketch is high contrast – bright sky with almost sillohetted pines and rock. But the rock (being almost) white also takes on the colour of the sky. 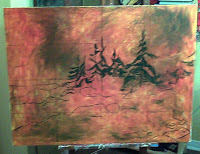 The under painting begins for the 40 X 30 version – composition is important with a simple bold images like this so if I get it right in the sketch, I want to maintain it for the larger canvas – a grid is used to scale up the sketch to ensure the balance is similar. I have added in a few more trees at the larger size – to providing more visual interest.

Here is the final painting – the white rocks are reflecting the blue of the sky – the pines almost seem to be surrounded by water – but they are at the top of Silver Peak – the highest mountain in Killarney. 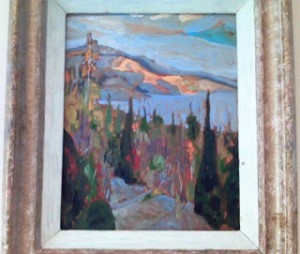 There are a number of larger paintings that have been requested. So today I am doing some sketching to find 2or 3 that will make good large pictures. A number of things are worked out at 8X10. Composition, colour, tone. And ultimately I can see if this is something I want to enlarge.

The sketch above dark trees in foreground, and a glimmer of light on the hills behind should enlarge well. 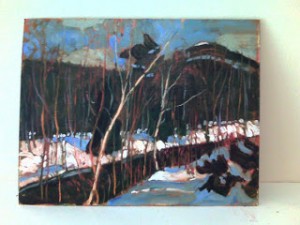 Birches on a river in winter. 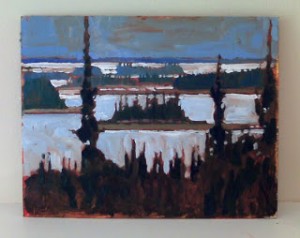 small islands filled with stunted pines – this is pretty dark and a bit graphic looking. 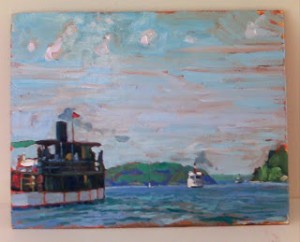 the steamers coming out of Gravenhurst – I think this could be a great paining with a little adjustment in composition.

The top and bottom sketches are good candidates for 30 x 40, but I will continue to cast around for some more ideas. 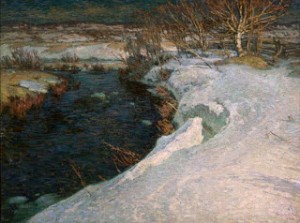 A couple of weeks ago, we went to the National Gallery in Ottawa. This place is a real gem. I have been to some of the best art museums in NA and Europe. And my experience at the National is always the best. Mainly because of the G of 7 collection. I love the impressionists but I feel a deeper connection to the Groups work.

The thing I find with spending a few hours looking at pictures is I tend to go back to the familiar time and again. And when I look, I am looking very closely – how did the artist create this contrast, how did he/she get this colour so luminous? I am looking inside the picture for technique. But I often get lost there and don’t appreciate some of the work I am less familiar with.

On this trip I discovered Suzar Coté –
Marc-Aurèle de Foy Suzor-Coté (April 6, 1869 – January 29, 1937) was a Canadian painter and sculptor. He was born in Arthabaska, Quebec in 1869. He studied at the École des Beaux-Arts in Paris with Léon Bonnat during the 1890s. After his return to Quebec in 1908, he produced many impressionist paintings of the Quebec landscape, as well as portraits, nudes, historical paintings and later sculptures.
Suzor-Coté became paralyzed in 1927 and later died at Daytona Beach, Florida in 1937.

The paintings in the National are spectacular and technically very good. I was lucky enough to buy a book of his work in the gallery on sale. It was a really good deal $20.00 for a $70.00 book. Filled with great reproductions of his work – pictures, sculpture and drawings – it will make a great edition to my collection of art books. I collect art books and mine are all well used and covered in smears of paint. I do often reference them as I paint.

If you are a fan of the true impressionists have a look at the work of Suzor Coté. 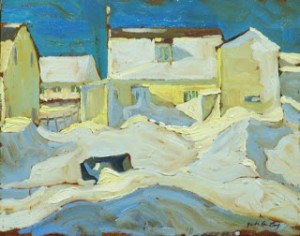 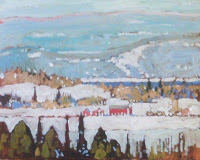 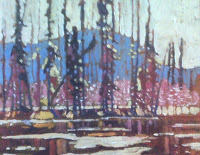 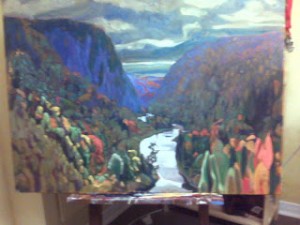